The aim of 100 Eccellenze Italiane is to honour the top “100 centres of excellence in Italy” and the precious contribution that each one makes to the development of the nation.
The 100 centres of excellence in Italy paint a picture of the best the country has to offer: its people, companies and organisations whose work has contributed and continues to contribute to promoting a distinctive brand that is recognised and appreciated around the world.
Colle delle 100 Bottiglie received the honour for its bold decision to return to sustainable practices in the vineyard and in the production of wine and oil in two historic crus in the Lucchesia, both of which had gone into a decline that appeared to be irreversible.
The symbolic acknowledgement was given directly by the president of the Associazione LIBER Verdiana Dell’Anna, by Sergio Santoro, president of the Committee of Honour and former co-chair of the Council of State, and by the publisher Riccardo Dell’Anna.

Appearing alongside about 800 other Italian producers in this guide to the “good wines of Italy” is a source of great satisfaction for us, for the guide only includes wineries that offer autochthonous wines that respect the traditions of their territories. This acknowledgement of the quality of our work encourages us to continue with our policy of promoting the value, wealth and proud history of our incredible wine-making heritage.

Falstaff is the oldest Austrian wine magazine and a guide that is the go-to reference for professionals in the sector. It is the most important lifestyle magazine in Central Europe and is distributed in Germany, Switzerland and Austria.

The editorial board have also tasted our wines and assigned them scores that are truly amazing… especially considering the fact that our wines are natural organic blends, and all those who work in the sector know how hard it is to adopt this policy – and this makes our satisfaction all the greater!

Italy’s first and still only publication that deals solely with products from agriculture that is certified as organic or in the process of conversion. The wines are listed and ranked in the Organic Wine section of the guide, assigning between two and five leaves to each one.

Then there are the finest wines, with a special mention, in the form of a gold leaf, awarded to those that have distinguished themselves above all others.

On 16 January 2020, in the famous Sala Koch of the Palazzo Madama, sponsored by the Senate and the Presidency of the Republic, Colle delle 100 Bottiglie received the 100 National Ambassadors award. 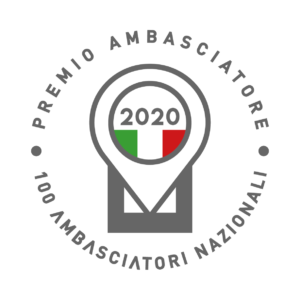 The Committee of Honour comprised numerous authorities, including:
Carlo Verdone |Chairman
Dott. Giovanni Mammone | First President of the Supreme Court of Cassation
Cons. Franco Massi | Secretary-General of the Court of Auditors
Amm. Giovanni Pettorino | Commander-General of the Italian Port Authorities and Coast Guard
Pref. Roberto Sgalla | Coordinator of the Mission Structure for the creation of a cyber-security centre of the Ministry of the Interior
Dott.ssa Maria Carmela Giarratano | Director-General of the Ministry of the Environment
Dott. Stefano Cuzzilla | President of Federmanager
Dott.ssa Alda D’Eusanio | Journalist and television presenter (host of the event)

The 100 Ambasciatori Nazionali (“100 National Ambassadors”) award is an honour given to 100 local institutions and companies in Italy that have distinguished themselves for their attention to sustainability, culture, creativity and skills, and to the social cohesion of the land and communities of which they are an expression. These are companies and institutions that promote and bring out the best of their territory and that, throughout the world, worthily represent even a minor part of the best of Italy, and that are authentically committed to promoting it.
In particular, Colle delle 100 Bottiglie was rewarded for its courageous decision to salvage and nurture the land using eco-sustainable practices and operations, and to produce wine and oil using grapes and olives from two historic crus of the Lucca area that had been going through what had appeared to be an unstoppable decline.